The place to discuss scripting and game modifications for X³: Terran Conflict and X³: Albion Prelude.

Your trader found a station to to sell the Ore, but after he bought it, the sell location isn't valid anymore because another ship already locked the deal in the meantime. For me this always fixed itself so far. They periodically try to sell goods from their cargohold. Once they find another factory which needs ore they get rid of it. It can take a while.

You can forbid your traders to cramp all their cargo full with one commodity by setting an external cash limit for your traders. But for ore this may not work because even small amounts are really bulky.
Top

I've just tested it again: when I put some wares into the cargo of a Trader, and that they cannot be sold, he "tries to export them", then return home, then unload them, before looking for other trade opportunities.
If you have a valid example of a possibly stuck Trader, please upload a save.
Mayhem - EasyConnect - Satellites Monitoring - ADS (Joubarbian Edition) - The Joubarbian Toolkit
Top

I seem to recall that in vanilla Litcube you could hide ships when they get built. Could that be added to the Outpost "Build Options"? It would be helpful when producing a lot of fighters that will end up moving to a carrier automatically anyway. The Ship Display Manager works fine, but this would eliminate that step.
Top

For those who don't know, "RC" means "Release Candidate", it's generally the last version before "the real one". It doesn't mean that 3.0 will be perfectly balanced or bug-free, but I don't consider Mayhem in beta anymore.
Mayhem - EasyConnect - Satellites Monitoring - ADS (Joubarbian Edition) - The Joubarbian Toolkit
Top

Huzzah! I posted this to Reddit, but want to congratulate you on such a smooth beta process (at least on our end, who knows what you went through).
Top

Thanks man, it has been... an adventure

Mayhem 3 out of beta? Long live Mayhem! Or not, we're now awaiting Mayhem 4! Back to work Joubarbe.

I wouldn't even know how a Mayhem 4 could even change the game even more than LU, Mayhem 2 and 3 already do. If anything, I'd love to see a final polish of Mayhem 2, since it's still a very fun gameplay with just a few mechanical issues left to deal with. And Mayhem 3 has so much that we yet have to try out, as the different galaxy settings of each game alter the experience INSANELY much. I yet have to give a fully filled galaxy a shot, and have yet to reach boarding/Yaki/OCV stage since there's always something happening that changes the progression from one lane to another.

By the way, have you considered using your XM-R mission boards for Mayhem 3? I liked the plug-in really much, although I never went very deep into it. What I liked was that every available mission was listed in the sector, so you didn't have to dock at each station just to see it's not the mission you've been looking for. I also loved the Heavy Escort missions, although I can see why they wouldn't be a thing in Mayhem, where ships are not supposed to be created from thin air.

X-Missions Reloaded is a very old script, full of bugs and very badly implemented. Mayhem 3 missions are fine as it is now, just use your other ships to dock where there are missions and use the Mission Briefing new command. It's by design that you have to dock.
Mayhem - EasyConnect - Satellites Monitoring - ADS (Joubarbian Edition) - The Joubarbian Toolkit
Top

To edit any script from X3, I highly recommend X-Studio, from mr.bear. Without this tool, I would never have gone into X3 modding. Also, because Mayhem runs on Litcube's Universe sets of new hardcoded commands, you'll also need this extra file, required for X-Studio to be able to read the new commands (put the file into the X-Studio root folder).

At some point, you may want to take a look at what scripts are running on what ships. It's easily doable by going into the script editor from your ship console (Shift-C, then S), then activate the following debugging option:

That will add a new information panel into any ship info menu: 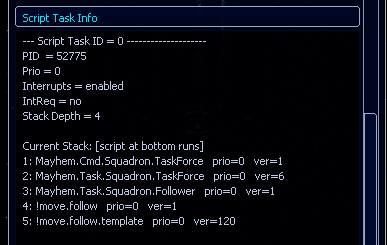 As this little article is not a tutorial, I recommend reading the MSCI Handbook, MSCI being the name of the scripting language used by X2 and X3. Chapters 4 and 7 are especially useful.

Mayhem 3 has about 800 scripts rewritten or modified. Vanilla scripts always start with an exclamation mark, but some of them have been totally rewritten, like !move.jump, !fight.attack.object, !fight.defend.sector or !fight.attack.enemiesrange.land. Some others have been added, also prefixed with a "!", because I consider them to be part of the fundamental commands, like !ship.cmd.flee, or !ship.cmd.fleet.retreat. Note that the "!" prefix is just a convention: it changes nothing about how these scripts work or interact between each other.

Before going deeper into how Mayhem 3 works, you have to understand that there are two kind of scripts: locals and globals. Local scripts run on a specific object (ship or station), and also on a specific task, Task 0 being the main task of every ship. Global scripts on the other hand run independently on Task -1. A list of these scripts can be found in the script editor, in the Global Script Tasks menu: 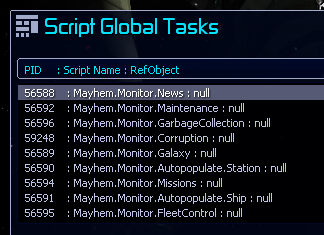 By convention, all Mayhem global tasks that run permanently (ie. in a loop) are prefixed with the "Monitor" keyword. As you can see above, these are very important scripts, like the two Autopopulate scripts that manage the AI strategies concerning ships and stations.

When reading other people code, it may be very useful to understand how scripts interact with each other. You can use a tool like Notepad++ and research the name of the script (without quotes and without the .xml extension) inside the scripts folder, or use the following X-Studio feature: 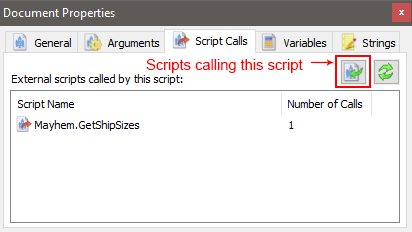 Script Prefixes
Many scripts are useless, such as all the ones that are prefixed with "!job", "al.", "!lib" and "!plugin". These are remnants from either vanilla, LU or other third party scripts, like MK3 Improved. They don't impact performance.

Here is a list of some of the most important scripts used by Mayhem ("X" indicates that there are multiple scripts with the same prefix): Adding New Ships

Adding a new ship via TShips (inside addon\10.cat) is not enough to make the ship fully and properly integrated within Mayhem 3. There is no magic in the AI, it has to know precisely what it is allowed to build. This is handled through Mayhem.Template.Ships. In that file, you'll find some of these lines:

This means that when the Argons need an M3 (see Mayhem.Template.Squadrons if you want to change the composition of their fleets), they will pick a random ship type from this list. So if you want to add a ship that is called "Betty's Fury", first add your ship to the TShips file (I won't detail how to do that here), then modify the script:

Remember that templates are only set at game start. You'll need to call Mayhem.Init.Templates again in your game if you want the AI to be updated, or start a new game (calling Mayhem.Template.Ships does nothing).
Research stations should be properly updated as they scan all available ship types every time you open the menu.

The above method is required if you add custom ships to the Commonwealth (+ Yakis). However, if you want to add ships for Xenons, you'll have to edit Mayhem.Monitor.Galaxy, because Xenons are spawned every X minutes from a random Xenon station, and they are spawned from thin air, and artificially equipped. If you need to add ships for Pirates, you don't have to edit anything, Mayhem.Task.Station.PirateBase is used on each pirate base to spawn a ship. It uses the script Mayhem.GetRandomShipType to get a random ship subtype from all existing ones, including the ones you add yourself. However, you need to define pirate ships as Yakis, because there are no Pirate ships in Mayhem 3.

Now the hardest part: ship balance. The following elements have been manually edited:
The general characteristics and the performance of the ships have all been automatically edited with an external tool I've developed, that you can find at this page. The script I'm using in Mayhem 3.0 can be downloaded here (you'll also need my custom variables - put everything in the root folder) (FYI, here is the original TShips I'm applying the script to). However, running this script on your newly added ships will not work, because Mayhem 3's ship balance is based on the physical size of each ship. What you need to do is to go in the in-game script editor, open the script editor menu where all scripts are listed, then highlight Mayhem.ExportShipSizes, hit R and execute the script on null (global script).

It will take some time to process. When it's finished, the data will have been exported to "addon\t\9978-L044.xml". You need this file to use my JSON tool (it will throw a fatal error if the file is missing). It's also better to include it if you want to share your new ships. However, it's not mandatory, the only downside is that the ship compendium won't display the size of your new ship.

When the JSON tool is finished, it will generate a new TShips inside an "output" folder. Copy that inside a new catalog file (overwriting the default file in 10.cat is a bad idea) via X3 Editor 2, and you should see consistent statistics in the ship compendium menu.

Note that the script I'm using for the JSON tool has some randomized values in it. That means that every time you run the script, ships will have slightly different stats.

Here is a list of all tasks ID that Mayhem 3 is using. You should never use these IDs in your own scripts, even though some of these come from Mayhem 2 and are obsolete.
Last edited by Joubarbe on Mon, 13. Jul 20, 07:42, edited 1 time in total.
Mayhem - EasyConnect - Satellites Monitoring - ADS (Joubarbian Edition) - The Joubarbian Toolkit
Top

When is this monster going to be ready for prime time?

Are there any u-tube vids, or other tutorials on 3.0 to outline some of the basics?


cheers.
Take your stinking paws off me you dam dirty ape!

Hey, Panda. Not sure, but it looks like a bug - Agent does not want to do task #10 - export Teladianium to hull planting facility

I've tried removing all other task, change different settings - still no clue, it just checks it and skips. Save is https://drive.google.com/file/d/1j2gRxl ... sp=sharing
Top

Indeed it was a bug, something about your Agent already wanting to go to your Hull Plating factory before requesting a trading lock. Fixed for next patch.
Mayhem - EasyConnect - Satellites Monitoring - ADS (Joubarbian Edition) - The Joubarbian Toolkit
Top
Post Reply
8051 posts